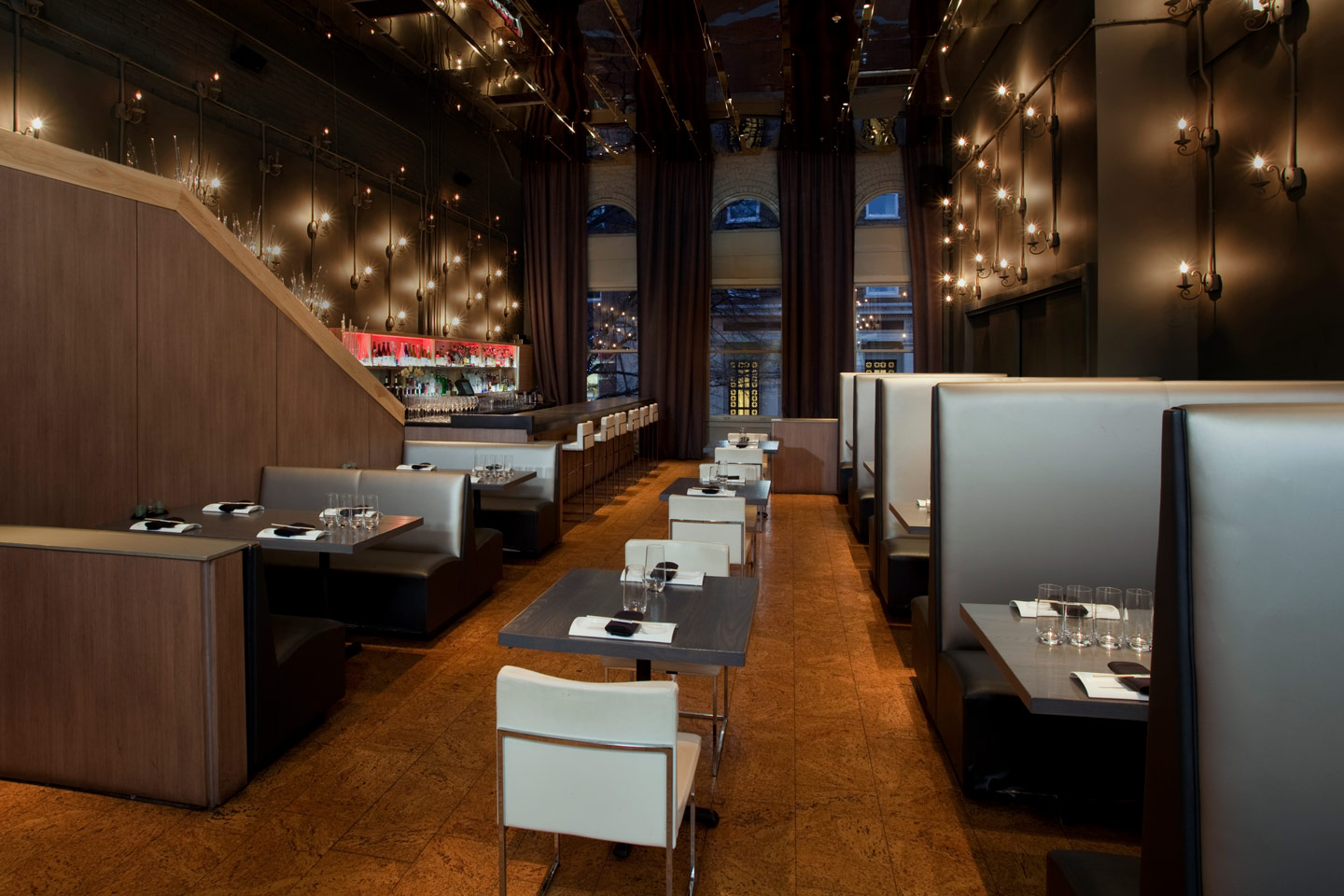 MSLD was asked to proceed in concert with the Contractor’s design-build schedule with lighting concepts and designs, which were to be approved by the Owner’s agent. Lighting design decisions for this project were made under rolling five-day deadlines, which also meant fixtures had to available with 48 hour lead times. The only set design elements were the reflective laminate ceiling and a cork floor in the main dining area, both of which had been installed six months prior to this project re-start.

MSLD chose to demonstrate the reflective ceiling by arranging inexpensive single lamp sconce fixtures in a quincunx pattern, taking a description of the pattern and its history from W.G. Sebald’s The Rings of Saturn. Philip Stark used a beautiful version of the pattern for the walls and upholstery in the lobby of the Delano Hotel.

The “quincunx” is a structure is found everywhere in nature. It is a geometric pattern composed by using the corners of a regular quadrilateral and the point where the diagonals intersect. The use of this serial arrangement in a tall, narrow space provides a still shimmer, as images of the lamps reflect recursively in the ceiling and the vast window glazing. Creating intimacy in a space with 18-foot ceilings is a design challenge.

Medium contrast is provided on table tops, and warm light is reflected off the table tops and the cork flooring. Low voltage energy-efficient halogen MR16 HIR lamps were deployed in track set between the ceiling panels. These lamps are dimmed 25%, which quadrupled lamp life and significantly warmed the light.

The intent was to provide the “half-light,” eloquently described in the novelist Junichiro Tanizaki’s homage monograph “In Praise of Shadows.”

Since the schedule and budget didn’t permit the use of dimmable fluorescent fixtures, lamp outputs are controlled by linear slot apertures, cut in steel plate bolted above the fixtures. The much cooler finishes and lamp output, laid on in washes, is designed as a counterpoint to the larger room, as well as to create a visually clean space suitable for serving sushi. Linear strip LED and carbon filament lamps provide visual interest. The project’s overall modest lighting budget added to the challenge of lighting this area.

TEN serves modern Japanese cuisine in a long narrow series of rooms located on the second floor of an early 20th century building. The new owner had successfully created a bar/restaurant below, but wanted a more upscale restaurant upstairs. The new concepts and compressed delivery schedule compelled the contractor to start construction with only schematic design documents. 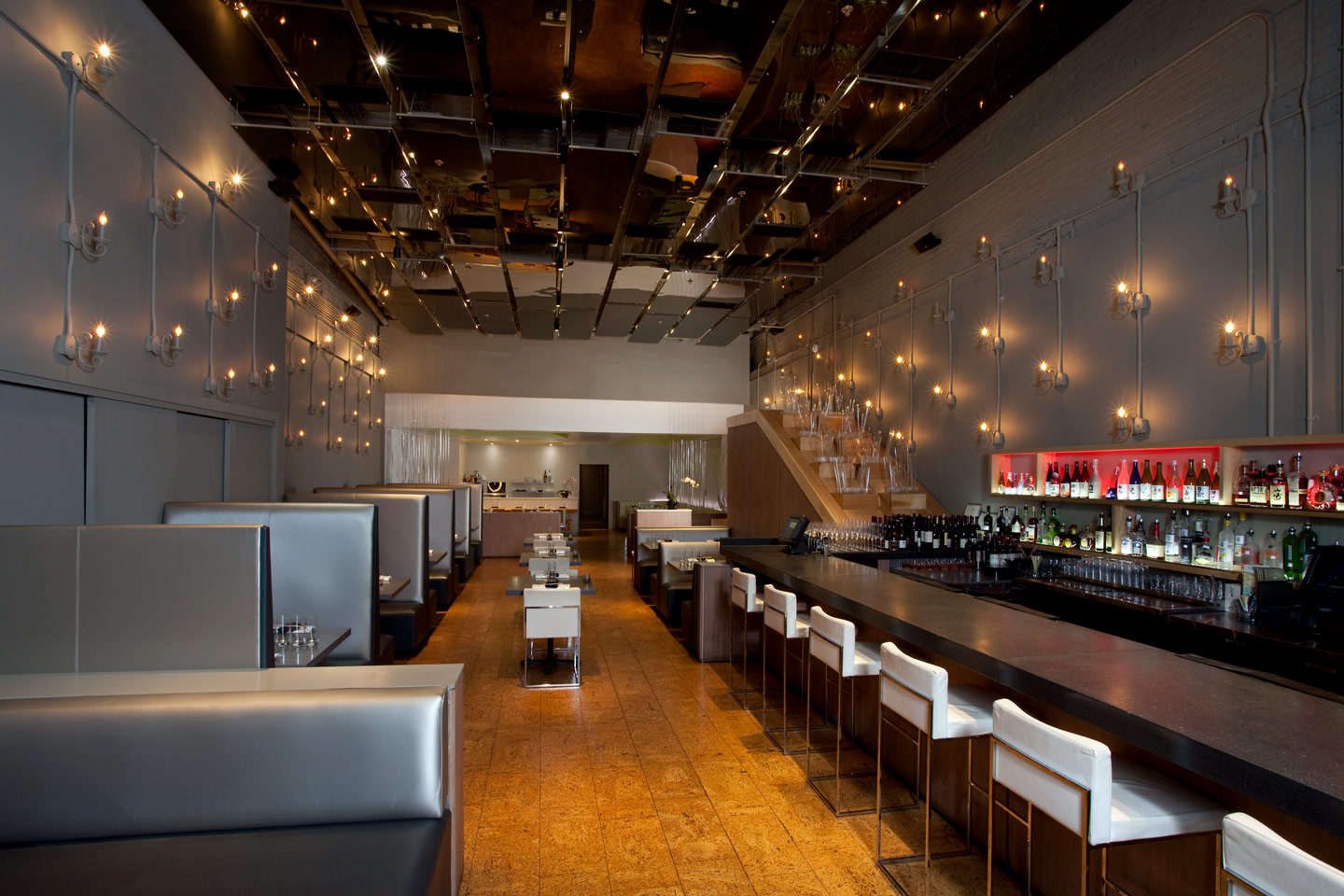 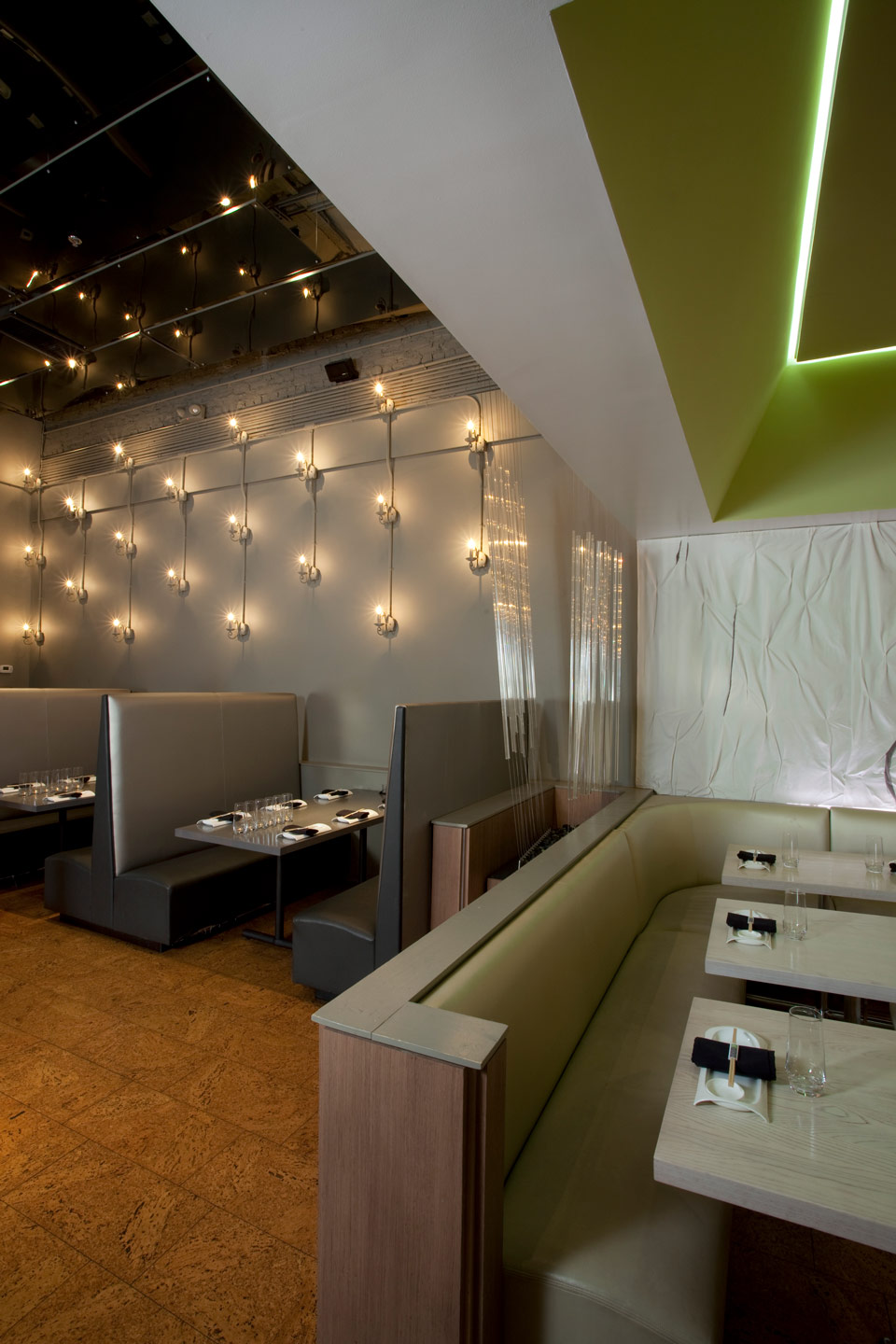 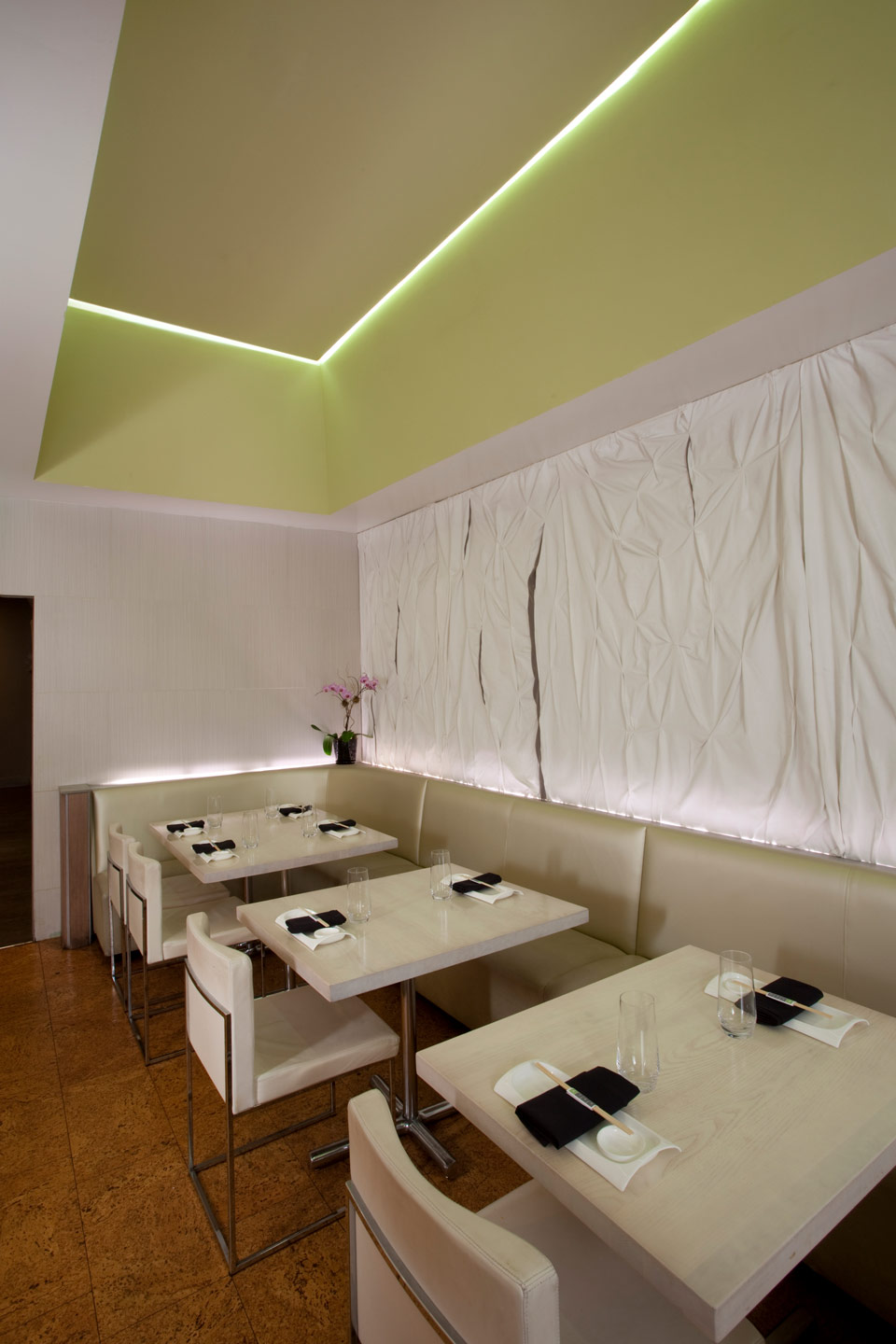 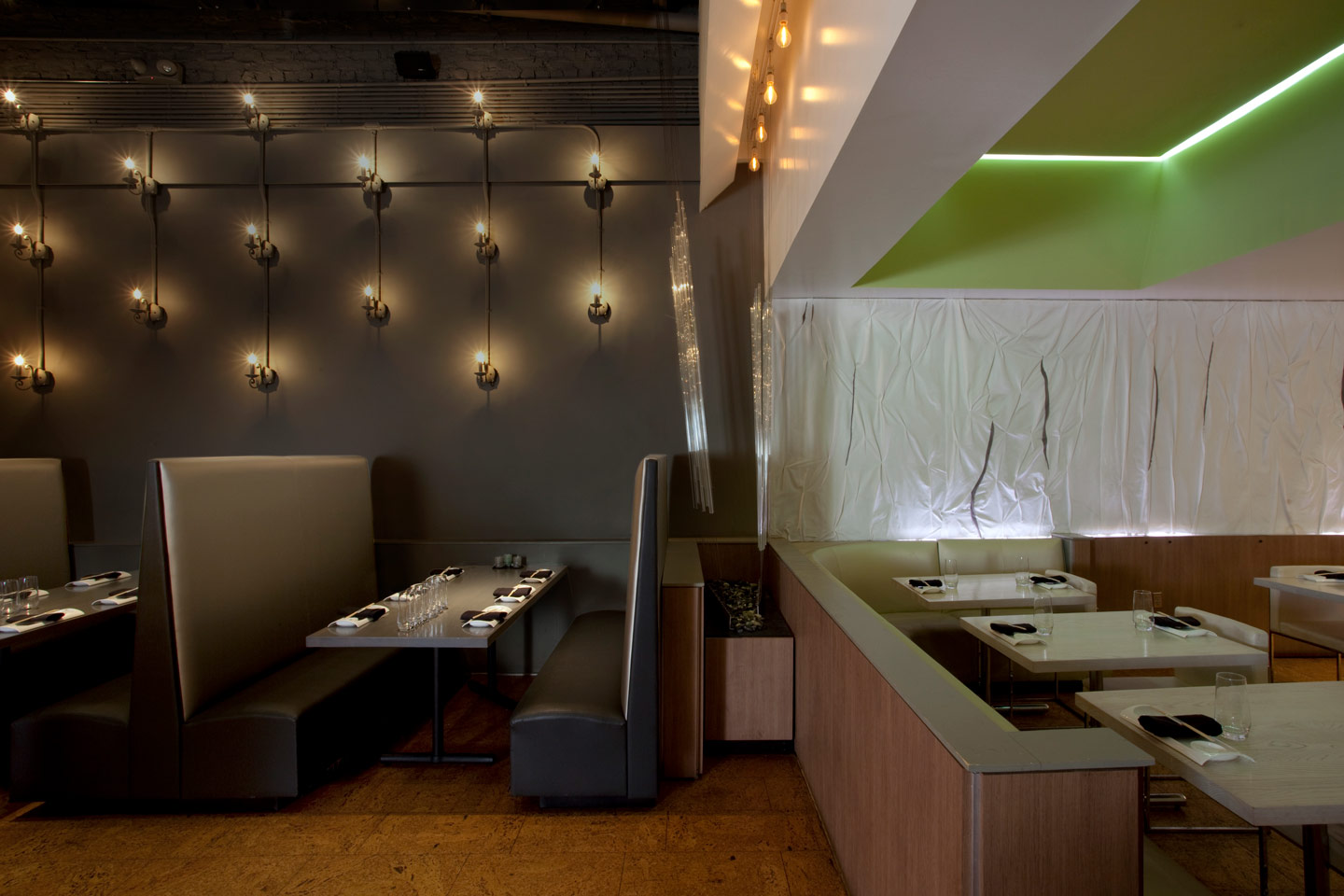 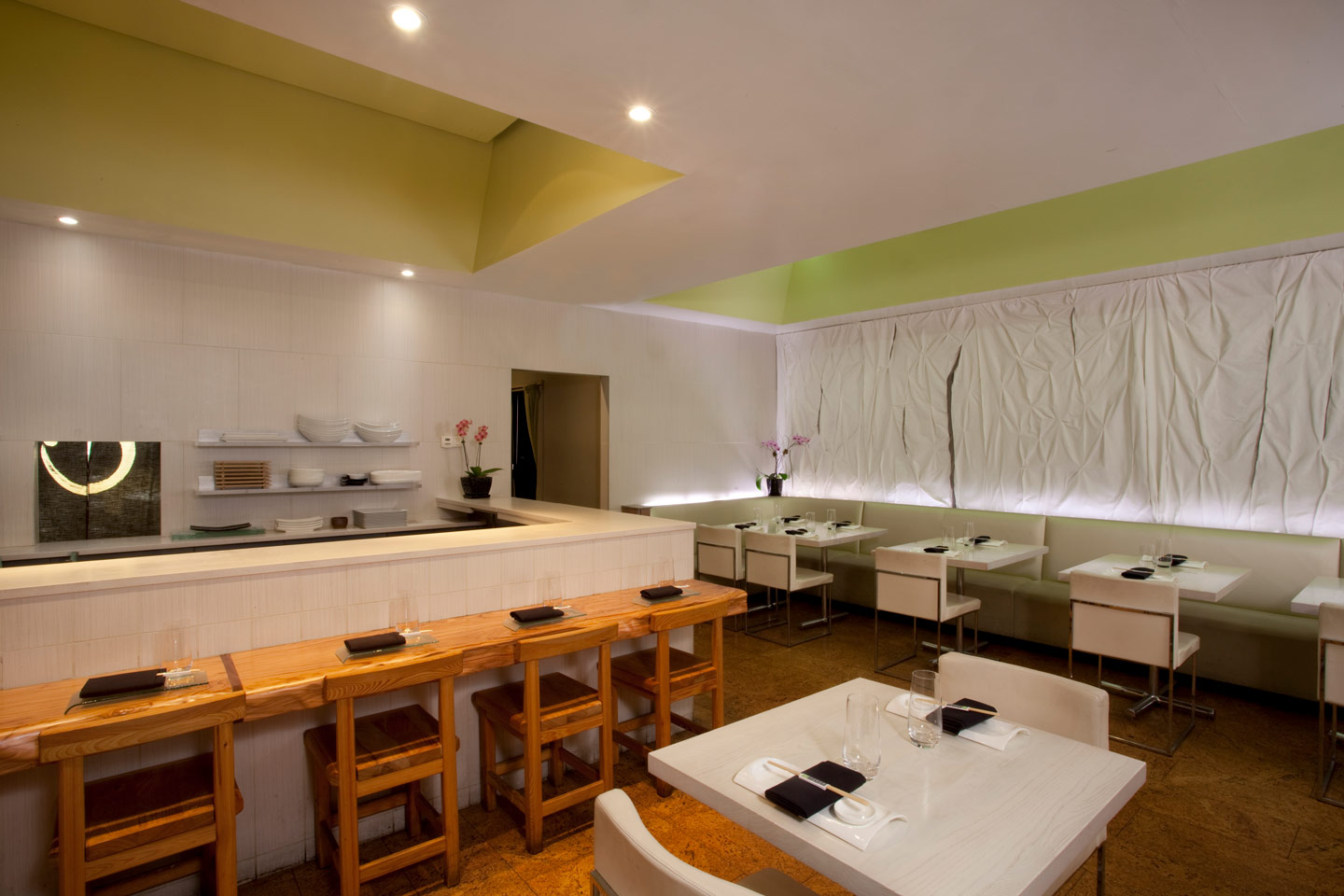